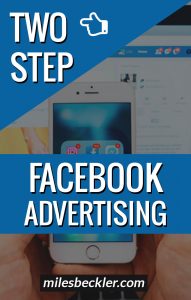 The two-step Facebook advertising strategy is an advanced strategy you can use if you don't have a large SEO traffic source.

In a previous video, I talked about how my SEO traffic and organic Google traffic is actually saving me up to 40 percent on my Facebook advertising. But the big trick here is the fact that I've spent years developing and growing the brand and reach through organic search engine optimization.

What do you do if you don't have an SEO powerhouse website?

First, you have to set up and run two separate campaigns. The first is designed to drive traffic from Facebook. This is highly targeted traffic that runs through the interests that were found from the audience insights tool.

Can you drive this traffic back to a killer piece of content on your Web site? When I say killer I'm talking about the Ultimate Guide to Your Product.

It should be the most compelling, the most thoughtful, the longest, most in-depth, ‘wow,’ inspiring piece of content you've ever created. You have to make sure that when you execute the strategy that you are sending them to something incredible.

This could be what's called an advertorial. Which is a combination of an advertisement and an editorial –like a case study. Note that I didn't say testimonial.

I’m talking about an actual case study that follows someone who went through the zero to hero story with what you offer. It could also be a very compelling piece of content that details the problem in a clear way that your users haven't read before.

If you have some amazing before and after case studies, this is a powerful way to pre-position yourself as someone who can deliver results. You do this before you ask them for any information or ask them to engage with your funnel in any way shape or form.

This gives you several different touch points with them before they ever enter your funnel. They're building their relationship with you. You can automate this entire process and the end results are generally a lower cost per lead and a higher conversion rate.

This is Your Warm-Up

Why does this have to be so compelling? Because this is your warm up in the two-step. I've used Gary Vaynerchuk’s analogy of the jab jab jab right hook before.

Give give give, right hook.

I like to use the set up and right hook analogy because what you're doing with two-step Facebook advertising is setting up your prospect. You're outlining the problem and you're positioning yourself as an authority.

This is a subconscious positioning. You want to quickly become the trusted adviser with this massively valuable piece of content that you're delivering.

The second campaign that you have to set up after they've consumed your content and go back to Facebook (which you know they'll do because that's where you first met them) is to promote your free give away.

Can you have your give away written in text as content on a post? Absolutely. The goal is to give value to your target market to help them solve a problem.

Your audience is just consuming content. There's no sales pitch at all. Their defenses are down and they think, “Wow, this person/brand really gave something to me. That's some good food for thought.”

When they go back to Facebook later, they see your advertisement for your free opt-in. This is where you get them into the funnel.

This works especially well if you're helping someone who is ‘problem aware.’ You detail the problem in a way that comforts them and makes them think that you get them.

Then when you retarget them with the second advertisement in the second campaign, that's your solution pitch. You educate them on the problem and plant a seed of thought around the solution.

The second ad campaign is able to really drive home the proposed solution that you have - through your free giveaway.

This mechanism isn't without its challenges. The big challenge is that you have to track numbers between two separate campaigns. You have to mix your add cost and click cost together in order to measure if it fits within your KPI’s.

You're paying for clicks twice in this situation. You are never just one funnel away, so testing is the ultimate way to know if this is going to work for you.

Within each ad campaign you can test different ad types. On the first ad campaign, where you're getting them to click on a piece of content to consume, you could do a CPM.

This is a cost per thousand views. If you have a very high click through rate and a high relevance score (which is highly likely because you have a long piece of content you're sending them to), you may be able to get a low click cost of less than 20 cents per click.

You’re just paying per thousand impressions, but you have to test it. I would start with a cost per click based advertising campaign. It will tell you what your CPM is.

If you want to split test that campaign against itself and run a CPM based one, see if you can cut your CPM down by 30 percent and get the same click through rate.

It's one way to tweak the knobs and dials on that first setting. Your goal is to get the most cost effective click from the highest relevance and the most targeted audience you possibly can.

Then, on the second campaign, you can run an optimized-for-conversion based campaign. You're either optimizing for the lead generation or for the OTO sale.

You can run these campaigns next to each other or you can split them against each other and let the data tell you which one is actually best. I highly recommend that you send people to multiple types of content that warm them up to different levels of awareness.

Facebook has their pixel on so they’re getting all the data from your user. They're tracking exactly what that user experience is and measuring things like the length of time spent on the site.

If all of those things are relevant with each other, your cost per click goes down. Facebook sees that you're giving their users a quality experience on your website. You really need to make sure that every level of this strategy is executed and well-thought out.

Again, the piece of content that you have needs to meet them where they're at.

Once you do that, send them to a few different pieces of content.

Leave it on an uptick. You want to show glimmer of hope. You can even have  a call to action at the bottom of this piece of content.

The ultimate goal with this kind of campaign is simply to warm up the prospect. This is the set up punch. Then you follow up with the right hook and ask for the opt in.

“Did you know that this golfing situation could hurt your back? Here's the three stretches you need to do every day to prolong your golf game and make sure your back is safe for years to come.”

If you'd prefer to listen to this content from the video above, play it or download it from the podcast episode below.

You can also check out my other Facebook campaign videos. Many of those are focused on the second campaign that brings them directly from Facebook to the opt-in page into your funnel.

One of the benefits you're often going to see with this kind of advertising set up is that people who have been to your site and have consumed your content before are going to have a higher likelihood of converting deeper into your funnel.

They also convert more quickly than cold target markets. They already know you. They're aware of your brand, they've seen your ads a couple of times, and they've had multiple touch points (getting closer to that seven touches) to make a sale.

The upgrade to weed out the tire kickers is Google's tag manager. Use it to fire your Facebook retargeting pixel. This is a free tool that holds your pixel.

The tool puts your pixel on a time delay. When a visitor clicks on your ad to read your advertorial you can delay the firing of your Facebook retargeting pixel. You have full control.

You're protecting yourself against people who clicked on the ad, took a two second look at your website, and clicked the back button. If that was a user experience, the odds of them opting in and wanting more content from you goes down significantly.

With tag manager, you're able to eliminate them. Your Facebook retargeting pixel will not fire until 30 seconds in on page load. You're only going to show those retargeting advertisements to people who have been on your site for at least 15 or 30 or 45 seconds.

This means people who actually engaged or consumed your content are the only people you're going to be paying to advertise your funnel to.

You're targeting your second step in the process only to the people who have the highest likelihood of wanting more content because they took the time to read the post.

Benefits of Using the Tag Manager with Two Step

This is a really powerful way to set up your ad campaigns if you're running ads and feeling like your cost per lead and your costs per customer are simply too high.

If the funnel that you have in that ad campaign is not giving you the KPI that you want, leave it in place and simply focus on your retargeting audience. Then, create one killer piece of content (or two or three over the course of the next week).

Then, set up another campaign that drives cold traffic from the first audience based on all of the interests. Send them to your content first, then show your opt-in page and funnels ads to only the retargeting pixel.

If you do that, you’ve successfully implemented Facebook two-step advertising. It's the set up punch and the cross right.

Give this a shot even, or especially, if you haven't been seeing the KPI’s or numbers you want. This is my go-to strategy when cold traffic to your funnel isn’t working profitably.

Get this implemented that may be the difference between a cash flow negative and a cash flow positive campaign.

Like what you read... Want more? Check out these posts next!

​"Great!  I've sent you an email with access information for the video case study!"

Enter Your Email Address Below And